PPO is an on-policy, actor-critic, policy gradient method that takes the surrogate objective function of TRPO and modifies it into a hard clipped constraint that doesn’t have to be tuned (as much).

PPO clips the objective function which limits the movement of the parameters, $\theta$, so the difference between the new and old policies remains small. In TRPO, this is implemented using the Kullback-Leibler divergence (KL divergence) as a penalty rather than clipping the importance sampling. Small policy updates within the trust region keep the policy stable during training.

In statistics, importance sampling is a general technique for estimating properties of a particular distribution, while only having samples generated from a different distribution than the distribution of interest.

Importance sampling has the advantage of being able to compute information about a target distribution with fewer samples than would be required by a Monte-Carlo method and can be used when it’s difficult to sample from the target distribution.

By including the importance sampling weight times the advantage of the sampled policy in the objective function, the agent can learn to reproduce policies that lead to a larger reward.

An explanation I’ve heard a lot for entropy is a measure of the disorder in a system. A more useful definition is the average amount of information gained by drawing from a distribution. Unpredictable distributions have higher entropy. This ties into the measure of cross-entropy which measures how close the predicted distribution is to the true one.

Run the current policy or $\pi_\text{old}$ with one or many actors in parallel for $T$ steps where $T$ is less than the episode length recording states, actions, rewards, and critic values. Then compute the generalized advantage estimate (GAE), $\hat{A}_t$.

Reproduced from the original paper

I’ve seen various implementations of the advantage and loss computation which are not always consistent. Often the advantage computation spans across episode terminations without resetting the reward discounting at the end of an episode. This doesn’t seem to make a difference but is worth looking into further. A TensorFlow implementation is shown below.

Next, compute the surrogate loss using the data collected over $T$ steps using mini-batches for some number of epochs, usually a small number like 3 or 4. Here’s a section of the larger learning function to compute the different losses and update the actor and critic parameters. The actor and critic can share the same bottom layers with different top evaluations or be completely separate networks. The actor network outputs a categorical distribution across the available actions which is used to compute the policy ratio $r_t(\theta)$ and the entropy loss.

Despite being simpler than TRPO to implement, PPO still requires some tuning of hyperparameters to succeed except in very simple environments. Below are some examples using my TensorFlow implementation on the OpenAI gym discrete lunar lander environment. 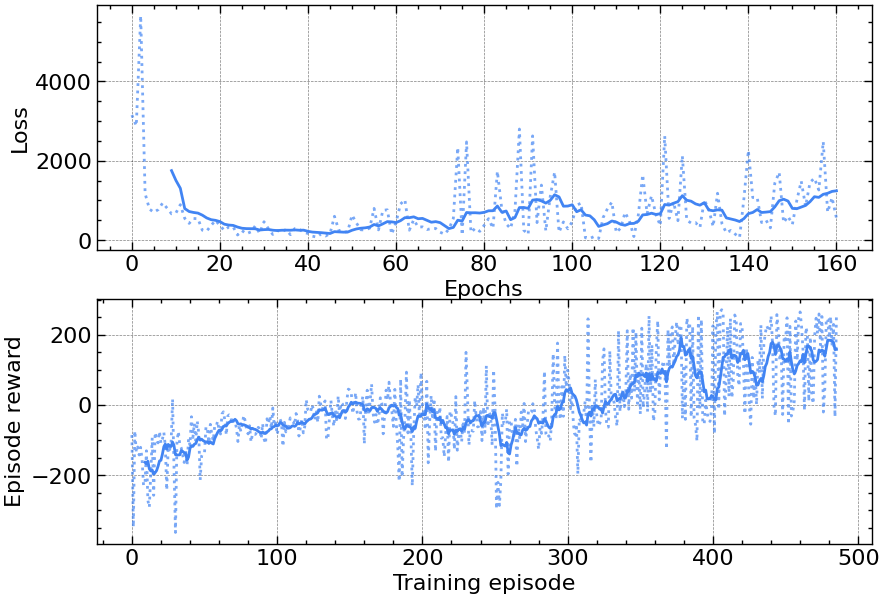 Now that this discrete version of PPO is working, I want to work on adapting the algorithm for continuous control (testing it on the continuous version of lunar lander) as well as using it on custom environments rather than just the OpenAI gym.